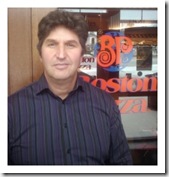 resident  Alex Smardenka, owner of Boston Pizza and husband of 2010 Deputy Mayor Candidate Sandy Smardenka has announced his intention to run for the Federal Liberal nomination in Simcoe-Grey. If successful in his bid, he will replace outgoing candidate Andrea Matrosovs of Collingwood who ran against Helena Guergis in the last federal election.

The process for gaining the seat includes gaining support from area Liberals who will vote for the candidate they wish to see represent the Simcoe-Grey riding in the next election. There is no announcement yet about when the Riding Association will vote on the matter but with nobody currently occupying the seat, the Liberals are under the gun to find a candidate quickly.