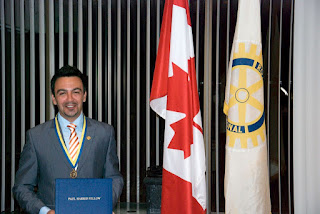 The following is the text of the Presentation.
The presentation of a Paul Harris fellow recognition is the Rotary foundation's way of expressing its appreciation for substantial contribution to it's humanitarian and educational programs. It carries its founder's name Paul Harris. A Chicago lawyer who started Rotary international with three business associates in 1905. Rotarians often designate a Paul Harris fellow service award as a tribute to a person whose life demonstrates a shared purpose with the objectives of the Rotary foundation. Today we have the honor and pleasure of recognizing Ehab Masad as he becomes a Paul Harris fellow. A world of peace and goodwill becomes closer to reality today as Ehab becomes a Paul Harris fellow. It is because of gifts like the one made in Ehab's honor that the rotary foundation is able to carry out projects to achieve beneficial changes in our world. Improved living conditions, increased food production, better education, wider availability of treatment and rehabilitation for the sick and the disabled, new channels for the flow of the international understanding and brighter hopes for peace.
Since joining the Rotary club in 2009 Ehab has embraced the ideals of service, he has traveled to the Dominican a number of times, he has been on both Haitian humanitarian refugee assistance and relief trips, first with the Rotary club of Wasaga in March 2011 and just last month with Innisfil club. He has started his own project of funding entrepreneurs in the Dominican with a dragon's den style project Ehab has challenged six people in Ascension Village to a business competition and the best team gets a cash reward, he helps and guide participants. Ehab has also traveled with his wife Dr. Dina Ghobrial who has assembled a 15 persons team in November with the help of a doctor from the Rotary Team and dental hygienist and other members from the community. Ehab is also committed to our very own community, he started the promote Wasaga committee and helped raise $15,000 he also helped the Rotary club of Wasaga in their first ever Easter hampers food bank project that will be distributing 300 hampers in two days to families in our community he also started the Wasaga Beach film Festival and was involved in the do good campaign and Ehab is also a step forward and agreed to lead Wasaga beach Rotary club as president beginning in July 2013. Ehab is also chair to the community service committee.
By accepting the Paul Harris Fellow service award, Ehab joined other notables as Mother Theresa, King Hussein of Jordan,Nelson Mandela, Kofi Anann, Prince Charles, Indira Gandhi, Luciano Pavarotti and John Paul II.
Posted by Unknown at 8:01 AM