Wasaga Beach Memories ..As We Were!

Here are just a few pix that may be of interest.

They include, a pic I took of some of "the gang" during one of our many weekends here in The Beach during the 70's. You may recognize Doug Adams and Doug Rowbotham standing beside Mrs. Timlock... who used to own the good ole Dardanella.

Bowling Alley in The Dardanella (note the ads over the lanes)

The El Morocco (where the Villa Nova Motel is now, next to Pedro's. It was owned by Jack Prezio's Mom and Dad. Jack worked there as a kid and met his wife there)

AND... a "Then and Now" group that I put together showing us snowmobiling in the parking lot of the Bon Air Motel. (one of our regular winter spots)  I'm on one of the Yamaha's in the group photo. Note the good ole Normandy Hotel across the street... exactly where our Boston Pizza is now! 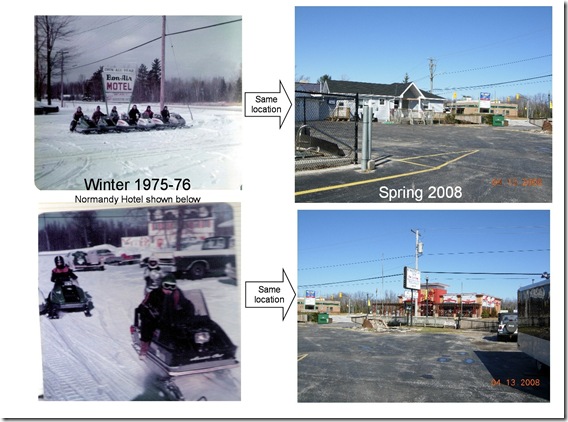