Wasaga Beach …Botulism may be cause of dead birds, fish 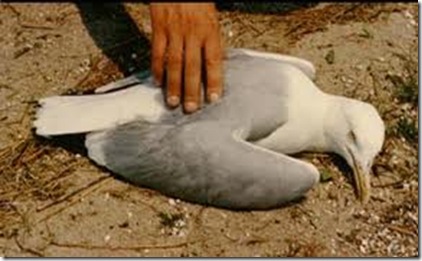 WASAGA BEACH – Wasaga Beach Provincial Park is warning people be extra cautious while walking their dogs on the beach because of a possible botulism outbreak.

Park superintendent John Fisher said the collected a number of birds and fish carcasses from beach areas one through six on Oct. 19 and 20.

Fisher said the park was alerted to the issue when staff started getting calls from people reporting a larger than usual number of carcasses washing up on the beach.

"People were noticing, not just dead carcasses on the beach but among the carcasses were a high number of loons," said Fisher.

He counted 27 dead loons, nine Sturgeon - some up to four feet in length - and a number of diving birds such as cormorants and diving birds.

Since then an additional seven loon carcasses were located in the same area and an additional three loons were reported dead at Allenwood Beach.

Officials have sent a fresh loon carcass to the University of Guelph for testing.

Fisher said the Ministry of Natural Resources, who controls the park, is looking to clearly rule out the botulism hasn't developed post mortem.

An MNR fisheries technician came to investigate. Fisher said he was particularly focused on the Sturgeon, which is considered a threatened species.

According to the MNR, the death of large numbers of fish and wildlife on the Great Lakes is not uncommon at certain times of year.

One cause could be Type E botulism, a toxin produced by a naturally occurring bacterium that lives in lake bottom sediment as harmless spores.

"Little is known about the ecology of the bacterium," says the MNR, "but under certain conditions - a rich nutrient source, such as a dead animal, a complete lack of oxygen and an optimum temperature - the bacterium begins producing the toxin and the toxin enters the aquatic food chain, affecting fish and birds that eat fish or molluscs (an invertebrate of a large phylum that includes snails, slugs and mussels)."

The Ministry of Health and Long-Term Care describes botulism as a rare but serious paralytic illness caused by a nerve toxin produced by the bacterium clostridium botulinum.

The paralysis may result in water birds not being able to hold their head up and as a result, often drown.

Fisher said there has never been a botulism outbreak on Georgian Bay, however "small-scale die-offs" caused by botulism occur annually around the Great Lakes. The largest die-off occurred in Lake Ontario in 2007.

Fisher said even though it is not allowed, people do walk their dogs on the beach and he is warning people to take extra caution and not allow their pets near any carcasses.

The MNR says if pets eat the raw flesh contaminated by botulism it could make them ill and could cause death.

Officials say the water itself is safe for swimming. Botulism is only contracted by ingesting contaminated flesh.

Fisher said normally the park would not remove carcasses from the beach but because he was getting a number of calls and wanted to get an accurate count, he did a one-time clean up and buried the carcasses near the park office at Beach Area Three.

People are responsible for disposing of dead birds on their property by burying them or putting them in the garbage.