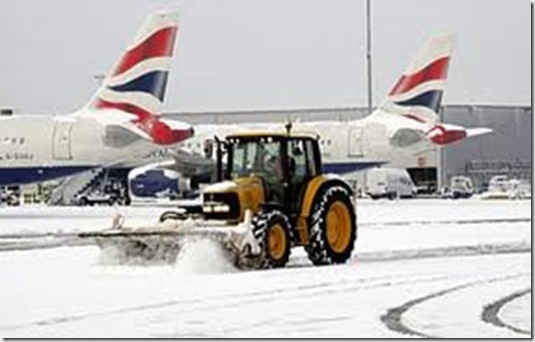 LONDON—“All I want for Christmas is to hug my mom.”

Doesn’t seem like a very lavish present Becky Dobbs is asking for, but to many Canadians facing the possibility of spending a third night sleeping at Heathrow airport Monday because of snow and ice, reuniting with family is the perfect gift.

Dobbs, 27, a supply teacher working in London, was supposed to fly to Toronto on Saturday evening to spend Christmas with her family in Wasaga Beach. Instead, she spent the night sleeping on the floor of Terminal 3.

Her friend, Kerry Foley, 24, also a supply teacher, had her flight to Ottawa cancelled Sunday evening. Both are rescheduled for a flight to Toronto on Christmas Day, missing most of the holiday. Because of this, Foley and Dobbs have decided put their name on a waiting list, and sleep at the airport every night, in case a space opens up on an earlier flight.

The mass in front of the Air Canada counter has about 40 people all hoping to get a spot on Monday’s late flight to Toronto. Many like Dobbs and Foley, have been in the airport since the weekend. Some are even afraid to go to bathroom, in case they miss their name.

“They call the name twice and then move on,” said Akinola Simon, 25, from Trinidad.

He’s hoping to get any flight back to Canada, so that he can make it to Trinidad for Christmas. He had already missed his name earlier in the day.

“Every time there is a new flight, you have to put your name back on,” he said.

After three days in the airport, Dobbs said she had noticed that the situation was bringing out the best in some people.

“As I was trying to call my parents long distance on my cell phone, I started sobbing in a little corner of the airport,” said Dobbs. “There were quite a few strangers that purposefully came up to me and said, ‘is there anything I can do to help you?’ ”

Steve Baltzois, 35, has also been trying to lift people’s spirits since his flight to Sydney was cancelled Friday.

After realizing that there were a very limited number of power outlets at the airport, he used his own powerbar, chargers and bought two adapters to charge as many cell phones, laptops, iPads and Game Boys as he could.

“Right now I can accommodate six plugs,” he said, sitting beside a Christmas tree.

Baltzois, who was born in Montreal, but grew up in Philadelphia, said it helped him meet people from all over the world.