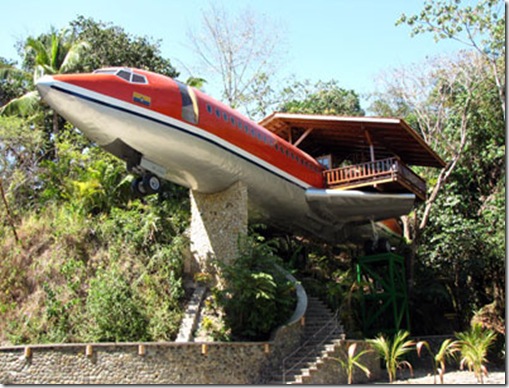 According to the message that accompanies this set of photographs, the images depict an old aircraft that has been converted into an attractive and well appointed private home. The images and description circulate via email and have also been posted to various blogs and social networking websites. As has apparently become the norm with virtually any unusual photographs posted online, at least a few self-proclaimed experts have declared their believe that the images have been "photoshopped" and do not depict a real structure.

Thanks and credit must be given to Mr. Vincent Costello for these pictures.

However, in this case, the photographs are perfectly genuine although the description of the images in the message is a little inaccurate. The photographs do indeed show an old plane converted into permanent (and non airborne) accommodation. However, this accommodation is not a private dwelling as suggested in the message but instead a suite that forms part of the Hotel Costa Verde, a hotel located near Quepos, Costa Rica. The aircraft is an old Boeing 727 that has been transformed into luxurious two bedroom accommodation for well-heeled travellers. The same photographs, along with a more accurate description, are available on the Hotel Costa Verde website. The webpage notes:

Hotel Costa Verde is proud to present its newest lodgings:
The fully outfitted, meticulously detailed, two bedroom, Boeing 727 fuselage suite. We have refurbished a vintage 1965 Boeing 727 airframe, which in its prior life shuttled globetrotters on South Africa Air and Avianca Airlines (Colombia).
Our phoenix is now ready for its future duty as the most exclusive hotel suite in Costa Rica.

Accommodation in the "Boeing 727 fuselage suite" will set you back between $400 and $500 per night depending on the time of year.
Although still unusual, reusing old aircraft fuselages fro dwellings and other purposes is certainly not unprecedented. A May 2003 article published on the Airport Journals website describes several homes that have been created out of old aircraft. And children at a school in Stoke-on-Trent in the UK attend lessons in a classroom converted from the shell of a decommissioned S-360 that once proudly flew the skys above Spain and Ireland.

Editors Note: Let’s get one of these in Wasaga Beach.