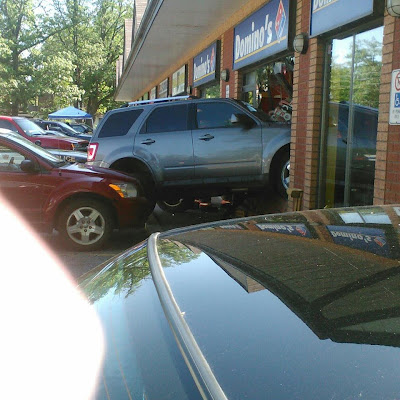 ByTrina Berlo
A vehicle went through the window at Domino’s Pizza in Wasaga Beach this morning.
Just after 10 a.m. neighbouring shopkeepers felt the building shake, heard a crash and a woman screaming.
The female driver of an SUV had crashed into the pizzeria’s window.
The crash happened an hour before Domino’s was scheduled to open and no one was inside at the time.
The driver of the SUV was not injured, nor were any bystanders.
Another vehicle in the parking lot at the plaza, located at 1441 Mosley Street, was damaged in the crash.
The vehicle was extracted from the window around 11 a.m. and Wasaga Beach firefighters worked to make the site safe, securing broken glass and other debris.
The vehicle struck a low traffic portion of Domino’s. The area will be cordoned off and it is expected that the pizzeria will be open today.
Posted by Unknown at 10:40 AM